I went to a flea-market today and picked op a bag full of doggies! That made me happy even though there weren't any figures of major brands. But most of the dogs where good custom models, some will probably only need a paint job and some minor touch-ups while others are more of a challenge.

Here's the first pair, the ones I have already some great ideas for.

I'm just not sure what to do with the one on the left...

Then there's the bunch that have potential but I'm not sure (yet) what to do with them or they just need a lot of resculpting. I need to come up with some ideas. The cats have heads that are too big but I think the could look cute with resculpted heads. 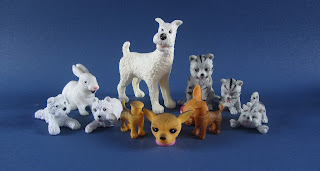 I sort of beheaded the two chihuahua's already because I think their head were just a tiny bit too big for their bodies. 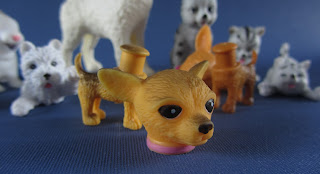 There was also a huge flock of schnauzers, but with all wrong proportions. I don't know if I can make anything out of it.

And last but n--, well euhm, last the leftovers. They have their onw charm just not the right charm for me. 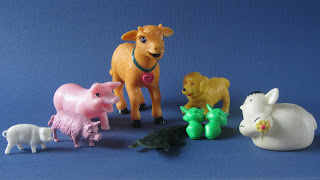 So it's now time to do some referencing and sketching :D
Gepost door Little Dandelion Studio (A-J) op 16:06 1 opmerking:

Let's blow some new life into this blog.

Some time ago I made this scupture of a Greenland dog for a sculpting workshop, so I took pictures of the whole op

If you were ever wondering how I tackle a sculture, here is your answer:


For the eyes I used the little glass balls that can be found in a fountain pen refill.

So here's the sculpture all baked

The paintwork is done too, but not yet photographed. So that'll have to wait for now.

So after a long silent time I can finaly post a new sculpture. I didn't use super sculpey this time but I still had some air drying clay lying around so I used that. On the package it said that it was supposed to have a rock/marble-ish look but when opening the package the clay turned out to be just gray with a hint of small glitter. I did use a bit of the clay for making a rock for a little dioramma but I think I still have to paint that into an actual looking rock.

So I decided that the clay wasn't worth just using for rocks and stuff like that and I decided to sculpt a puppy. 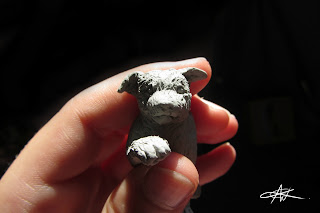 It was inspire by a picture of a staffordshire bull terrier. I didn't look too much into scale but I think it could just pass a 1:12 stafford puppy. 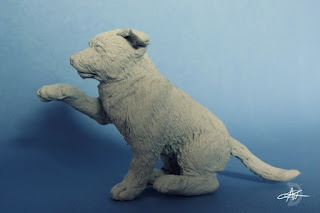 It still needs to be painted though... I'm not sure what colour yet.
Gepost door Little Dandelion Studio (A-J) op 11:25 Geen opmerkingen:

Here's the little fjord horse I was working on some time ago. It has been finished for a while (and living with it's owner in the US) but I never got around posting the pictures I took. So here you go: 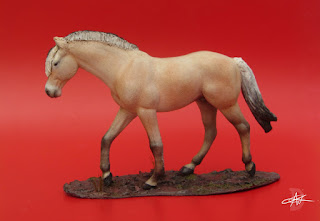 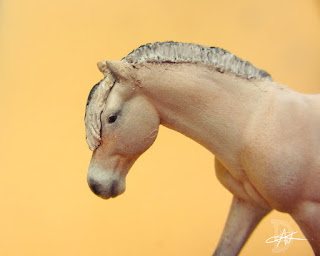 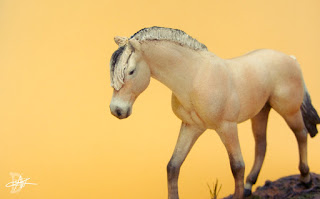 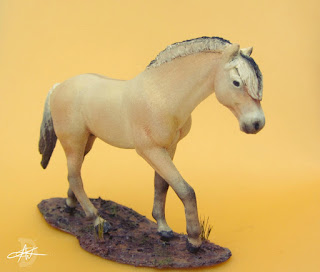 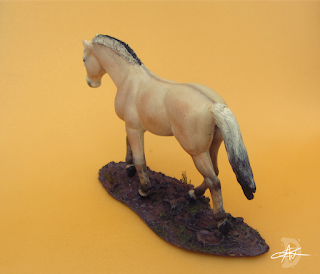 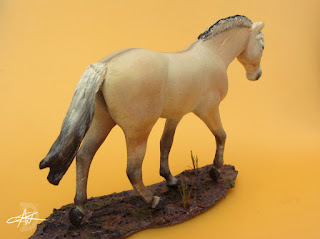 Sculpting figures with polymer clay takes time but creates figures with a lot of detail. However I do not always have time or have access to sculpting supplies. Most of the the I have the supplies, but not the time but there are some small occasions that I don't have the supplies but do have time. Once a week I travel by train and I need to sit in the train for about an hour and I usually wrap my lunch in aluminium foil. And without sculpting supplies aluminium foil is the next best thing to "sculpt" with.

Long story short: When I'm in the train with aluminium foil I make I little animals out of it and leave it behind in the train : ). But I do however take pictures before I leave the train.

Here's one (I actually didn't make in the train). 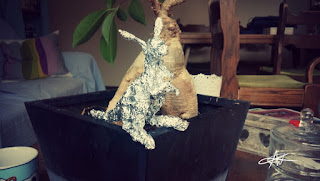 A new custom I've been working on is this little fjord horse. It started as a brown sika horse of which I removed the mane. I also changed the backline and the headline to make it look a bit more like a fjord. Partly because I could use my brother's dremel and partly to make it look a bit more fjordy cuase let's be honest; this horse doesn't really have the fjord build...

Anyway, I restarted his repainting twice probably because it was a while age since I repainted "fur-textured" animals. When a figure has fur texture it is easier to paint smooth transitions but when dealing with a smooth textured figure those transitions can better be done with pastel dust. (espesially when you're just using acrylics in the evening when it looks all fine until you see it in broad daylight the next morning...)

But now he's almost finished, just the last details need to be done.
(my apologies for the low quality photo's) 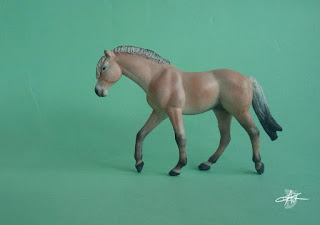 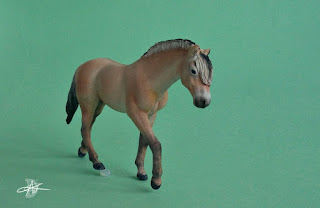 Because the horse is not is not really capable of standing well on it's own I made a little base. 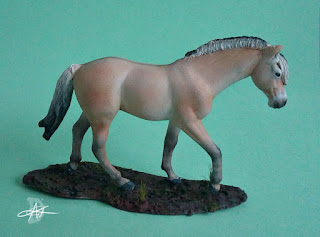 Here are all the materials I used to make the base. I'm really pleased with it, but it doesn't really show well in the picture. 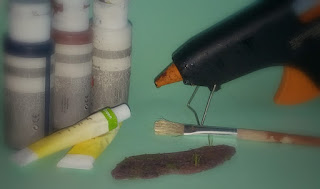 Some time ago I sculpted this little fennec fox but I never found the time to paint her. She's been sitting on a cabinet for quite some time and had her little leg broken off once. However, I'm very pleased to tell you that she now finally has been given a proper colour.

Because fennec foxes are so small, I decided to sculpt it in 1:12 scale instead of the usual 1:22. Here she is: 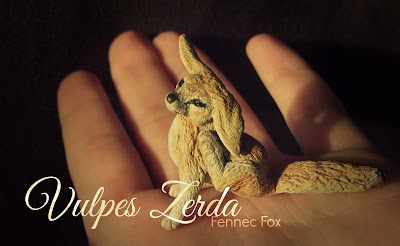 " The fennec fox or fennec (Vulpes zerda) is a small nocturnal fox found in the Sahara of North Africa. Its most distinctive feature is its unusually large ears, which also serve to dissipate heat. The fennec is the smallest species of canid. Its coat, ears, and kidney functions have adapted to high-temperature, low-water, desert environments. In addition, its hearing is sensitive enough to hear prey moving underground. It mainly eats insects, small mammals, and birds. "
- wikipedia 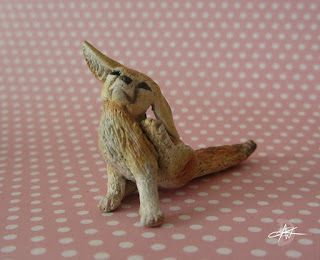 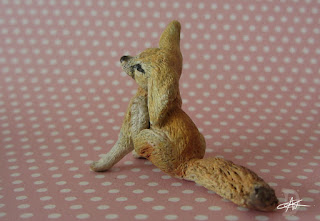 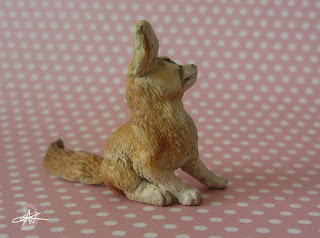 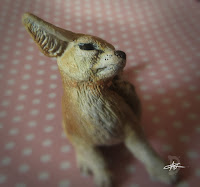 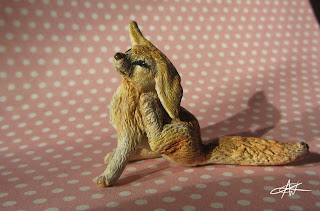 I'm not sure whenever I mentioned it in other posts, but while I was sculpting I kept some sort of a log in ms excel of the time I spent on it. I hoped it would give me more insight as how long it would take for me to actually sculpt a little animal as a lot of people ask me how long it takes to sculpt something. For the painting of the fox I didn't kept a log... not for any specific  reason, just 'cause I just didn't think about it.
I have no idea what others normally do... though it looks quite okay. I expected it to take longer then the stated hours, but that could also be because it took several days and it wasn't in one go...


*Sorry it's in Dutch.. "tijd" means time and  "uren bezig" means hours spent. Everything else is clear enough I think.

Little Dandelion Studio (A-J)
Hello people! As you can see, one of my favorite hobbies is customizing and sculpting animal figures. On this blog I will post my (overdosis of) pictures of my CMs and some other projects. Feel free to take a look at all the pages in my archives if you like browsing customs :D